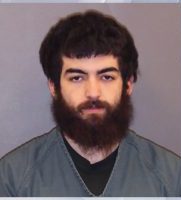 On January 15, 2019, the Saratoga County Sheriff’s Office responded to a missing person report involving Michael Ahern of Stillwater.  Ahern had last been seen or in contact with his family on January 6, 2019.  The investigation determined that Ahern resided at 16 Brickyard Road in the Town of Stillwater and had not been seen there since January 6, 2019.  The location was the former clubhouse of the Rolling Pride Motorcycle Club.  Ahern lived at that location with Jack Jeffers, (dob 6/2/1995) at time of his disappearance.  As the investigation progressed, the police determined that Ahern was likely the victim of foul play and had not simply left the area.  Ahern had not used his cell phone since the afternoon of January 6, 2019.

On March 15, 2019, Jack Jeffers was involved in a property damage accident in the Town of Saratoga and left the scene of the accident.  The vehicle Jeffers was driving was located in the Town of Stillwater and stopped by Stillwater Police Department.  Jeffers was found to be in possession of a loaded handgun at that time.  After many months of investigation, it was determined that the gun recovered from Jeffers’ car was used by Jeffers to kill Michael Ahern.

Between January 15, 2019 and January 5, 2021, the Saratoga County Sheriff’s Office, with assistance from the New York State Police, interviewed numerous witnesses and executed numerous search warrants in furtherance of their investigation.  The investigation determined that Jack Jeffers and Michael Ahern were alone together at 16 Brickyard Road on January 6, 2019 and that Jeffers killed Ahern.  Ahern’s body was removed from that location.

District Attorney Heggen praised the tenacity and efforts of the Saratoga County Sheriff’s Office and the New York State Police Major Crimes, Forensic Identification Unit and SIU in their continuous pursuit of the facts behind the disappearance of the victim, Michael Ahern- “Their tireless work brought about the conviction today of Jack Jeffers for the disappearance and death of Michael Ahern.”

The investigation into the circumstances following Ahern’s death remains under investigation by the Saratoga County Sheriff’s Office and New York State Police.  Both agencies have thoroughly and tirelessly investigated this case over the past two years.