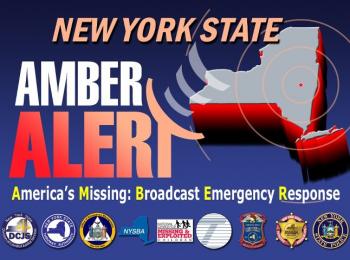 The automated alerts are now possible through the National Wireless Emergency Alert System.

The WEA system uses the latest technology to send messages to wireless customers with WEA capable phones in an area where an alert has been activated. When receiving one of these messages, the phone will emit an audible tone unique to WEA and then display an AMBER Alert. The message is not in the form of a text message. It is a full screen alert that will provide limited details.

For more details, the public can subscribe to receive free AMBER Alert text messages by going to the NY Alert website and creating an account. The account can be customized to receive alerts in the form of text messages, fax, and/or email.

Many cell phone users do not know their phones even have this feature and the wireless industry has indicated that all cell phones are expected to be WEA capable in 2013.

New York State Police Senior Investigator Gary Kelly, AMBER Alert Coordinator for NY State said, “WEA is another tool that greatly enhances the public’s ability to play a role in the recovery of an abducted child. With the AMBER Alert information in their hands, the public can now immediately help in the search for the child.”

Through the use of NY Alert, when police believe a child under the age of 18 has been abducted and is in imminent danger of death or serious harm, an AMBER Alert is sent out.
The AMBER Alert plan was created in Texas in 1996 as a legacy to nine-year-old Amber Hagerman who was kidnapped and murdered while riding her bicycle. The AMBER Alert program was started in New York in 2002 and is a voluntary partnership between law enforcement, broadcasters, and others to immediately involve the public in the search for an abducted child.

Richard Novik is Senior Vice President of the New York State Broadcasters Association. “The success of the AMBER Alert Program in New York is something we, as AMBER Alert partners, are all very proud of. One of the most important ingredients of the program is adapting to the changing media environment. Some years ago New York City Taxis installed television monitors for passengers and we were able to have AMBER Alerts included within the programming. And now AMBER Alerts can be heard via cell phones, and we must be there too. Wireless Emergency Alerts will play an important role in saving children’s lives, and we hope the public will embrace the concept.”

Putnam County Sheriff Donald Smith represents the New York State Sheriffs Association on the AMBER Alert Committee. “After each activation of an AMBER Alert in New York State, we conduct a thorough after action review to determine the lessons learned from each experience. An overarching theme for each one is the importance of the public’s participation in helping law enforcement recover an abducted child. Adding New York alert notifications and input to our toolbox will vastly improve an already successful AMBER Alert Program.”