STATE PRISON FOR MECHANICVILLE WOMAN WHO STOLE $500,000 FROM HER EMPLOYER 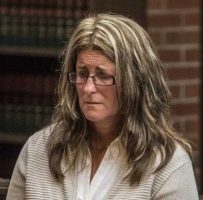 These convictions stem from an extensive investigation and audit of the records of Hatalsky’s prior employer.  The investigation revealed that since January 2011, the defendant had used her employers’ credit card to purchase personal items for herself, her family and others.  Her purchases included Christmas presents, a snowmobile, a lawn tractor, a welder, as well as trips and dinners.  To cover up her crimes, she falsified the business records she was responsible for keeping.  Over the course of the five years, she admitted to having stolen $ 500,000.00.

In a Victim Impact Statement today in court, the founder and former CEO of her former employer noted the significance of this crime to his company.  He started by describing a relationship that spanned more than 25 years, with Hatalsky joining them at age 18 to answer phones and do minor clerical work.  As the company grew, so did the defendant’s duties and responsibilities, to where she was the Office Manager when her criminal actions were discovered.  The defendant’s violation of her fiduciary responsibilities as Office Manager affected the entire company.  Her former employer said, “While the crime was bad enough, the betrayal of trust was so much more painful”.  After a forensic audit was completed, his “…shock turned to a deep disappointment and resentment”.  He spoke about the financial challenges the company endured because of the defendant’s continuing theft and how Hatalsky knew of the company’s cash flow difficulties and yet she continued to steal from the company.  He posed the question “What could we have done had we had that money?”, concluding that had the company had the stolen money “…what these investments in our business could have yielded, we will never know”.

District Attorney Heggen stated that “the defendant’s deliberate, calculating actions over such a significant period of time and for a significant amount of money caused irreparable harm to the defendant’s employer and her fellow employees, many of whom spoke of each other as family”.

When given the opportunity to speak, the defendant did apologize to the victims and promised to pay back the restitution in this case.  Judge Murphy stated that this was not a straightforward case, and that the defendant’s actions were most egregious given the personal nature of the crimes and her long-term employment with the company.  The Judge said that the restitution that has been paid to date, $430,000.00, was an important aspect he considered in imposing sentencing. Murphy issued a judgment for the outstanding balance of $ 70,000.00, to be paid over the next ten years.

The case was investigated by the New York State Police at Clifton Park.  Wickes Forensic Accounting and Consulting, LLC completed the forensic audit in this matter.