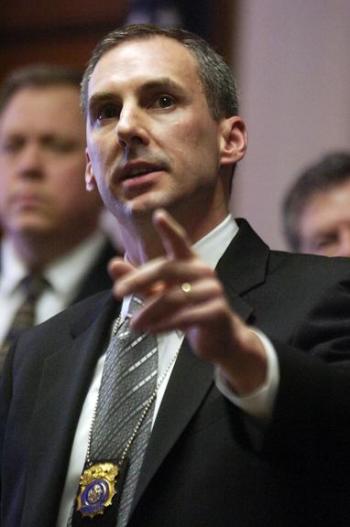 SARATOGA SPRINGS — The Saratoga Springs Police Department is speculating that a Malta man, who allegedly shoved a woman’s head against a wall, injured himself while fleeing police early Saturday morning.
Daryl Mount Jr., 21, is currently dealing with life threatening injuries at Albany Medical Center, after he was found by police following a foot pursuit around 3 a.m. on Saturday, according to a report released this afternoon by police Chief Greg Veitch. Officers began chasing him, after Mount was allegedly seen shoving a female’s head into a brick wall near the corner of Caroline Street and Broadway.
The full police report is available on the Around Saratoga blog.
Police said they pursued Mount south on Broadway, where he ran into an alley on the north side of the Washington Building at 422 Broadway. In pursuit, police attempted to deploy their TASER devices, but both attempts failed, based on a recovery of the probes that were fired.
At the rear of the building, where a wooden barrier was in place to prevent access to the construction area, which includes scaffolding, police said Mount climbed over the railing of a wooden barrier and onto scaffolding in the rear of the building. An officer attempted to pursue him, but was slowed by posts and beams and a lack of light. Additionally, police noted that the area was wet from rain earlier on Friday.
Officers in the area ran to the front of the building to Gardner lane, next to Lillian’s restaurant, to cut off any escape routes. A nearby witness was questioned during the search about whether they saw anyone running in the area, but police said they just heard a thud and didn’t see anyone running. Shortly after conducting the field interview, police said the officer on the scaffolding observed Mount lying on the ground, where he was unresponsive, but breathing.
First responders from the Saratoga Fire Department provided medical care on the scene, which required cutting away Mount’s clothing. He was then transported to the Albany Medical Center
Police said there is no video surveillance that documents how Mount injured himself. According to Vetich’s report, police “speculate” Mount fell or jumped from the scaffolding to evade police, at which point he most likely fell about 20 feet to the ground.
Police noted that there is video evidence of Mount slamming an unidentified woman’s head into a wall. He has not been charged for this, police said, because they’re waiting for him to recover from his injuries. “It is for that reason alone that the police have not formally charged Mr. Mount with any offense at this point,” Veitch said. “Any criminal case will proceed at an appropriate time in consultation with prosecuting authorities.”