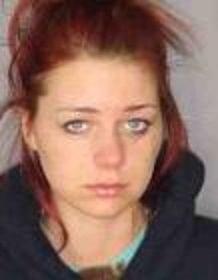 Saratoga County District Attorney Karen A. Heggen announced today that Alison J. Pecor, (dob 5/11/96) of 110 Hollister Road, Corinth, NY was sentenced today by Saratoga County Court Judge James A. Murphy, III to 4 to 12 years in prison following her July 10, 2017 plea to Vehicular Manslaughter in the First Degree, a “Class C” felony, in violation of New York State Penal Law Section 125.13(6) and 1 to 3 years in prison for her plea to Vehicular Assault in the Second Degree, a “Class E” felony, in violation of New York State Penal Law Section 120.03(1).  Said sentences shall run concurrently.  The plea and sentence stems from a crash that occurred on February 5, 2017 in the Town of Hadley that resulted in the death of the defendant’s 18 month old daughter Gracelynn Madison and caused serious physical injury to the operator of another vehicle that Pecor hit head-on.

The investigation by the Saratoga County Sheriff’s Office revealed that on February 5, 2017, Pecor was under the influence of alprazolam, commonly known as Zanax, and nordiazepam, an active metabolite of what is commonly known as Valium, when she crossed over the centerline of Route 9N and crashed into an on-coming vehicle.  Pecor’s 18-month-old daughter died as a result of the injuries sustained in that crash, and the operator of the vehicle struck head-on by the defendant suffered multiple serious injuries

Today at sentencing, the Vehicular Assault victim’s brother-in-law advised the Court of the profound change circumstances in her life.  She has suffered permanently, disabling injuries, which now confine her to a wheelchair.  She continues to suffer physical and psychological pay on a daily basis.  Assistant District Attorney Katherine DeMartino addressed the Court and spoke about how the defendant “…made a serious of decisions …on the morning of February 5, 2017 that claimed the life of [her daughter] 18 month old Gracelyn Madison.  The defendant chose to consume drugs…knowing she was in no condition to be operating a motor vehicle.”

District Attorney Heggen noted, “This case is another example of the destructive consequences made by a defendant who chose to operate a motor vehicle while under the influence of drugs.  Her decision to drive that day brought about the tragic death of her 18-month-old daughter.  Pecor’s choice to get behind the wheel of her car has also dramatically altered the life of an innocent victim driving her car.  The victim now faces a life where she is confined to a wheelchair and her everyday life is forever greatly impacted”.