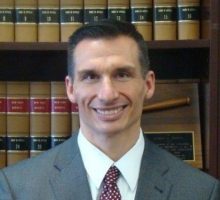 Poremba previously served as the Drug Unit Bureau Chief, where he primarily handled felony drug prosecutions throughout the County while also prosecuting various types of violent felonies as well.  Three of Poremba’s most notable prosecutions include: Nelson Costello, a 40 year old cold case homicide; Douglas Stewart, convicted after trial of menacing a police officer; and Rodney Bailey, convicted on Manslaughter in the First Degree in 2006.  Poremba has tried over two dozen felony cases as a lead prosecutor and has acted as a second chair or supporting role in many more.  Over his 12 years in the Saratoga office, Poremba has also been the local court ADA for Greenfield Town Court.

First Assistant District Attorney Poremba’s duties will include both courtroom and administrative duties.  He will handle his own caseload and will assist and supervise all other ADAs in the courtroom.  Poremba will assist DA Heggen with the assignment of cases, training of ADAs, implementation of internal policies and evaluation of her professional staff.  The First Assistant DA’s duties and responsibilities also entail acting as the District Attorney if for some reason DA Heggen is absent or unavailable.

Poremba graduated from Minnechaug Regional High School in MA, Union College, and Albany Law School.  His wife, Jessica, is a Kindergarten teacher in Saratoga Springs and they have two children: Cole age 7, and Ava age 5.

Heggen said, “Al has been a dedicated member of this office for many years.  I am pleased that he will now be serving in a leadership role as my First Assistant District Attorney.  He is someone respected by attorneys, members of law enforcement and the many professionals my office interacts with on a daily basis.  His commitment to seeking justice in Saratoga County has been at the forefront of his work for the past 16 years.  I look forward to working with him as a policy maker and advisor.  Al is a go-to person who follows through and gets things done.  I am confident that he will continue to serve the citizens of Saratoga County with dedication and devotion to justice and the rule of law as First Assistant”.