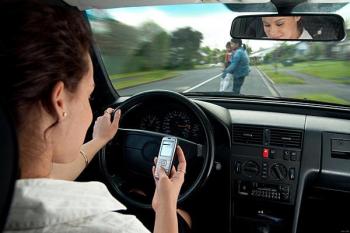 DAILY GAZETTE EDITORIAL JULY 3, 2013 Stiff penalties won’t work without enforcement New York’s crackdown on young motorists texting while driving, subject of a Page One story in Tuesday’s Gazette, is certainly welcome, but it won’t solve the growing safety problem any more than giving away free bike helmets and ice cream cones (see June 28 Gazette) will get kids to wear them. New York state’s problem with distracted driving (i.e. talking or texting on cellphones) is all about the lack of enforcement (as is the reluctance of most parents to abide by the law requiring them to make their kids wear helmets while bicycling). The laws have been around for years, but the problem persists because cops aren’t willing to crack down on violators. As the statistics in Thursday’s story indicated, there are far more crashes causing death or injury as a result of distracted driving these days (25,165 in 2011) than there are from drunken driving (4,628). Yet cops charged more motorists with DWI that year (43,954) than they issued tickets for texting while driving (30,166). It’s not all that hard to see someone talking on a cellphone or texting while driving: It’s fairly obvious when the motorist is either holding the phone to his ear or keeps looking down to his lap every few seconds while he swerves on down the road. A drunken driver is a different story: He has to commit some infraction or be observed driving erratically, which many drunken drivers don’t do until — oops — they crash. So all the strict penalties in the world won’t mean a thing unless police start taking these infractions more seriously and conducting sustained enforcement efforts to stop them. And, yes: Given the serious threat to public safety they obviously pose — more serious than DWI, according to these statistics — such efforts would be advisable.