Ms. Joey Paul gets 18.5 years in prison plus 5 yrs parole but explodes in outburst during sentencing against murder victim’s mother 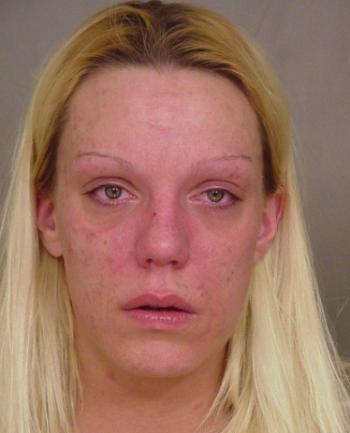 Joey Paul sentenced to 18.5 years plus 5 years post release supervision despite vulgar outburst aimed at deceased’s mother,
for previous conviction to Manslaughter 1st in shooting of boyfriend with AK 47.

Saratoga County District Attorney James A. Murphy, III announced today that Joey M. Paul (DOB 12-21-83) of 12 Birch Ln., Stillwater, N.Y. was sentenced today by Judge Jerry J. Scarano to 18.5 years in a state prison, plus 5 years of post-release supervision for her previously entered plea of guilty to Manslaughter in the First Degree in violation of section 125.20 (2) of the Penal Law as Class B Violent Felony.

Paul previously admitted to intentionally causing the death of Matthew Furlani while under the influence of an “extreme emotional disturbance”. The sentencing stems from an incident that occurred on July 1, 2012 at 82 Church St., Schuylerville, NY wherein the defendant shot Matthew Furlani with a high powered assault rifle, AK 47, at close range in the upstairs bedroom area of his apartment. Neighbors had heard arguing just prior to the gunshot.

Furlani suffered one fatal gunshot wound to the head which caused immediate death.

The couple had a tumultuous relationship prior to the incident. The history between the defendant and the victim indicated a long history of Ms. Paul instigating abuse and violence towards the male victim.
Multiple neighbors called 911 upon hearing the gunshot.

New York State Police- Malta responded to the scene and found the defendant at that location. She was taken into custody at that location. Trooper Aaron Stefanik was the first on the scene. The scene was secured and held until such time that the NYSP Forensic Investigation Unit arrived and processed the scene for the collection of evidence.

The defendant was arraigned and evaluated and subsequently transported to The Central NY Psychiatric Center, at Marcy, NY.

During the sentencing today, there was an unusual and extraordinary outburst by the defendant, Joey Paul. As mother of the deceased Matthew Furlani quietly and appropriately read her victim impact statement out loud to the judge, the defendant stood up and screamed at Mrs. Downey, “F### you, you C### !” The courtroom broke into pandemonium as Mrs. Downey and her daughter, also present, responded to Paul and there ensued a shouting match between the mother and daughter and the defendant. Had it not been for Judge Scarano who quieted the emotionally charged court room, it would have quickly escalated even further, but the judge was able to calm the parties down and control the situation, once again, restoring order. Sentencing continued.

DA Murphy said “There is nothing more emotional than the sentencing in a homicide case and I can’t imagine what Mr. Furlani’s mother was going through as she was reading the heartbreaking statement-and then to be screamed at by the defendant in such a caustic and vulgar way, it’s stunning that she was able to find the strength to go on. I give her credit for continuing to read her victim impact statement in such a poised and focused way. I’m pleased she was able to continue to tell the judge how Joey Paul’s pulling the trigger and killing her son forever changed her and her family.”

Despite the bizarre and out of control behavior by the defendant, the family of Matthew Furlani advised Assistant DA Lyn Murphy who prosecuted the case that they felt the ultimate disposition was appropriate. They indicated that “while nothing can bring him back”, they are “grateful for the closure.”

Ms. Paul will be transported to Bedford Hills Correctional to begin her sentence.