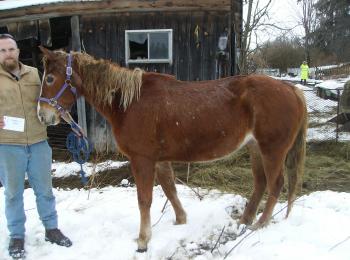 James B. Foster Arraigned in Greenfield Justice Court today on 3 Counts of
Failure to Provide Sustenance to 3 Horses

Saratoga County District Attorney James A. Murphy, III announced today that James B. Foster, dob 2/7/63 was arraigned today in the Town of Greenfield Justice Court on three counts of Failure to Provide Sustenance to three horses under his care at a farm at 131 Wilton Greenfield Road, Greenfield New York, in violation of Agriculture and Markets Law Section 353, a class A misdemeanor. These charges stem from an on-going New York State Police investigation, which included the execution of a search warrant issued by Greenfield Town Justice Michael Ginley on the property at 131 Wilton Greenfield Road on December 21, 2013. A licensed veterinarian assisted the police and made an assessment of the condition of the horses at that location. The veterinarian found two of the horses to be malnourished and had other health issues which were not being properly attended and addressed. The veterinarian also found a third horse to have an ulcerated cornea of an eye which in the veterinarian’s opinion caused pain to the horse and could lead to vision loss if not attended properly. As a result of this assessment, Foster has been charged with three counts of Failure to Provide Sustenance to those animals. The charges allege that Foster “…did fail to provide proper sustenance, food or water to a female horse….said horse was examined by a veterinarian and found to be malnourished and to have other health issues which were not being attended to by the defendant…”, as well as failing “…to provide proper medical care for an ulcerated cornea of an eye to a horse…[which] most likely is in pain and most likely to lose some or all vision in the injured eye without proper care”.
The investigation continues and charges are anticipated to be filed against the owner of the horses and the property regarding the horses’ condition.
Foster entered a not guilty plea to the three charges and has been directed to re-appear in the Greenfield Town Court on February 18, 2014 at 9:00 am. Judge Ginley also issued an Order directing the SPCA of Upstate New York to monitor the condition of the horses during the pendency of the charges.

*** Please note that the man in the corresponding photographs is not a defendant and was just assisting with the photos.