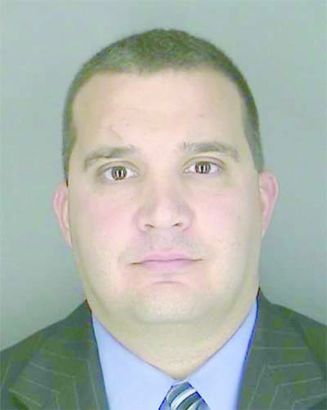 Former Johnstown Police Officer Adam Schwabrow admits to Rape 3rd and resigns, expected to get 1 year in the Fulton County Jail and must register as a sex offender


Saratoga County District Attorney James A. Murphy III was appointed as a special prosecutor for Fulton County District Attorney Louise Sira due to a conflict, and announced today that former Johnstown Police Officer Adam Schwabrow (DOB 6-13-81) of 301 South Perry St., Johnstown, NY, pleaded guilty today in Fulton County Court to one count of Rape 3rd in violation of section 130.25(2)  of the Penal Law as a class E Felony in that he admitted that as someone 21 years or older he had sexual intercourse with someone less than 17 years of age.  The crime occurred in May of 2011 in the City of Johnstown.

Schwabrow was not on duty at the time of the commission of the crime and at no time was force alleged in this case.  Acting Fulton County Court Judge S. Peter Feldstein presided over the matter in County Court.

Officer Schwabrow resigned his position with the Johnstown Police Department effective today at 1:00 PM as part of the plea agreement entered into the with Saratoga County DA’s Office.  Schwabrow was previously ordered to surrender any firearms at the time of arrest which occurred on September 19, 2013, including his “duty” revolver and other personal firearms.  The DA’s  Office was not provided a list of the firearms, but they were surrendered to the Fulton County Sheriff’s Department.

In addition, at the time of sentencing, Schwabrow is expected to receive one year in the Fulton County Jail together with appropriate fines and surcharges.  Sentencing has been scheduled for May 13, 2014 at 10:00 AM. Schwabrow will also be required to register with the NYS Sex Offender Registry.


Assistant DA Jennifer Buckley who prosecuted the case said that “The victim was fully cooperative in the prosecution and is relieved this part of her life is over.  She is satisfied that he plead guilty to a felony  and has resigned as a police officer. ”

DA Murphy said “As an adult he should know better than to have sex with a minor and that is exactly why the statute is written, to protect young girls.  Someone who commits a felony and exercises such horrific judgment should never be a police officer and that is why we insisted on a resignation as part of the felony conviction and jail time.  In addition, he will be registered with the NYS Sex Offender Registry upon his release from jail.”