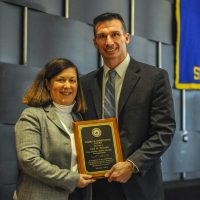 “Alan Poremba epitomizes the characteristics of the former New York District Attorney Robert Morgenthau, for whom the awarded is named.  He is a dedicated, committed prosecutor who works tirelessly each day to insure that justice is achieved for all involved in the criminal justice system in Saratoga County” said DA Heggen.  In nominating Poremba for this award, Heggen highlighted several cases Mr. Poremba has handled since joining the Saratoga County District Attorney’s Office in 2004, including an almost 40 year old missing person cold case that ultimately resulted in the prosecution and conviction of Nelson Costello who killed then 22 year old David Bacon.  DA Heggen said “Al worked tirelessly with members of the New York State Police to piece together the events from those many past years, uncovering witnesses in far regions in the country, and ultimately securing a conviction for manslaughter that resulted in a significant prison sentence”.  Additionally, Heggen noted that “Mr. Poremba’s work last year in securing Burglary convictions in two separate home invasion cases in Saratoga Springs brought to justice a defendant dubbed by the press as the “Sleeper Creeper”.  ADA Poremba proved at trial that the defendant broke into people’s homes and was present in their bedrooms as they slept.  That jury verdict of guilty resulted in the defendant receiving the maximum sentence and removed a dangerous predator from our community”.

Poremba said, “This is a true honor named after such a revered DA, yet it is my co-workers and my family that deserve the recognition.  It is their dedication and daily sacrifices that help keep our great community safe while inspiring me to never be complacent.”