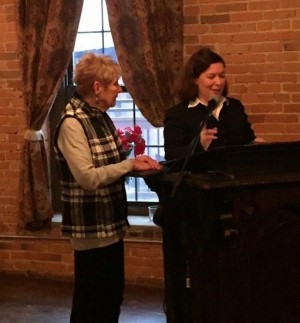 District Attorney Heggen was also honored to welcome several volunteer victim and offender speakers from the Saratoga County Victim Impact Panels. The Victim Impact Panel is a monthly presentation overseen by the Saratoga County Youth Bureau and moderated by The Prevention Council. The Panel is attended by defendants who have been convicted of Driving While Intoxicated and Driving While Ability Impaired and sentenced by a judge to attend the program. The Panel is designed to provide these defendants with a first-hand account and perspective of the consequences of Driving While Intoxicated or Impaired may bring. Police officers and prosecutors speak about their experiences handling such cases. The defendants also hear from speakers who have been convicted of Driving While Intoxicated or Impaired, and the effects that experience has had on those offenders. The defendants are also addressed by volunteer victim speakers. These dedicated men and women volunteer victim speakers have suffered injury themselves, or the death of a loved one as a result of someone choosing to drink and/or drug and drive. Heggen thanked “the volunteer victim speakers each month who share their stories about the terrible events which occurred after a defendant consumed alcohol or drugs and then choose to get behind the wheel of a motor vehicle and drive. These are preventable crimes, as an intoxicated or impaired driver chooses to drive after ingesting alcohol, drugs or a combination of both. The Victim Impact Panel speakers believe it is important to re-educate people convicted of alcohol and drug related driving offenses to the danger they put themselves and others in”.

The Stop DWI Breakfast is held to shine a light on the consequences and impact drinking and drugged driving have on the communities throughout Saratoga County. “As the holiday season approaches, events such as our Stop DWI Breakfast shine a light on the efforts of all who work tirelessly to educate others about the tragic consequences that can occur when people choose to consume alcohol and/or drugs, and then drive a motor vehicle.”