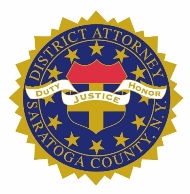 At the time of his plea, Elston admitted that he intentionally caused serious physical injury to his fiancé by punching her in the face and causing a fracture of her left eye orbital floor as well as intentionally causing physical injury to his brother by striking him in the mouth with a pistol.  The Saratoga Springs Police Department recovered the loaded .25 caliber pistol Elston used to strike his brother while securing the assault scene.

District Attorney Heggen noted the work of the Saratoga Springs Police Department, as their quick response, investigation and apprehension of the defendant, which led to the recovery of the evidence in this case and prevented the defendant from causing further injury to the victims and others in the area.  Assistant District Attorney Charles Bucca prosecuted the case.