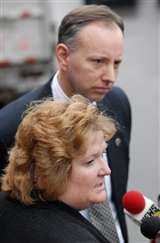 Clifton Park elementary school teacher Christopher Culver admitted in court that he molested eight of his first-grade students, pleading guilty to all charges against him as his trial was about to get under way in Saratoga County Court.

Culver sobbed and shook throughout his morning court appearance, at points forcing Judge Jerry Scarano to slow the proceedings to allow the 33-year-old defendant to compose himself.

“A defendant is not entitled to a plea bargain. In this case the crime of sexually abusing children is so egregious that we insisted on a plea of guilty to all the crimes for every child,” District Attorney James Murphy said.

*Jennifer Jensen was elected to the Family Court Bench for Saratoga County and was sworn in January of 2011.  She is the first woman to take the Family Court bench in  the history of the County.