On Sunday, April 10, 2016, the Saratoga County District Attorney’s Office hosted the 17th Annual Candlelight Vigil for Victims of Crime.  The Vigil marked the beginning of National Crime Victims’ Rights Week observances throughout the Capitol Region and the country to promote victims’ rights and honor crime victims and those who advocate on their behalf.

Saratoga County District Attorney Karen A. Heggen moderated this years’ program held at St. Peter Lutheran Church in Malta, New York.  The attendees were welcomed by Arthur “Mo” Wright, Chairman of the Saratoga County Board of Supervisors.  The Saratoga County Board of Supervisors issued a Proclamation declaring April 10-16, 2016 as National Crime Victims’ Rights Week in Saratoga County.  The Proclamation recognized that the National Crime Victims’ Rights Week theme of Serving Victim, Building Trust, Restoring Hope, reminds us of the significant progress we have made in recognizing victims’ rights and at the same time emphasizes the need to expand our reach to victims who are less likely to seek services on their own.

District Attorney Heggen was pleased to present the 2016 Saratoga County District Attorney’s Public Service Awards to Sgt. Daniel Morley, of the Saratoga County Sheriff’s Office and Katharine Winderlin, Volunteer at Wellspring, a not-for-profit organization dedicated to assisting victims of sexual assault and domestic violence.  Sgt. Morley recently completed his 18th year of service with the Saratoga County Sheriff’s Office.  In addition to his supervisory duties as a sergeant, Morley is also a member of the SCUBA unit, a department firearms instructor and also devotes considerable time as a speaker at the monthly Victim Impact Panel in Saratoga County, where he addresses individuals who have been convicted of drinking and/or drugged driving offenses.  Heggen described Morley as “…humble, thorough, intelligent and insightful.  He is passionate about DWI enforcement and its effects on the citizens of our community. “

Heggen also noted the accomplishments of Katharine Winderlin, a resident of Ballston Spa.  Winderlin was unable to attend the vigil, but Heggen, in her remarks about Winderlin spoke about the thousands of hours Winderlin has “…regularly and quietly volunteered for Wellspring and other organizations, shying away from any recognition, the only reward she seeks is being able to help with the really challenging moments in people’s lives.  Katharine is truly an exceptional and inspirational woman!”

The Vigil continued with musical selections from Patrick Gioia, brother of Mary Regina Gioia, a victim of Homicide, and Saratoga County Assistant District Attorney Jesse Ashdown and his son Andrew.  A scroll listing the names of victims of crime was displayed.

National Crime Victims’ Rights Week continues with observances throughout the Capitol Region and the nation this week. 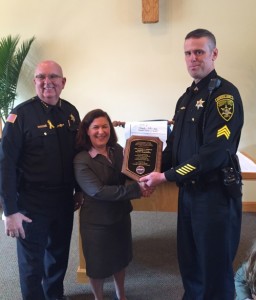 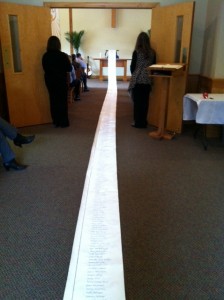 Saratoga County Victim’s Scroll with 484 names of Crime Victims from the past 17 years. 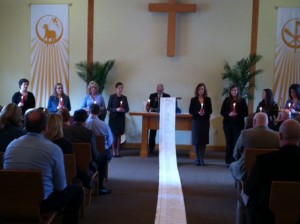 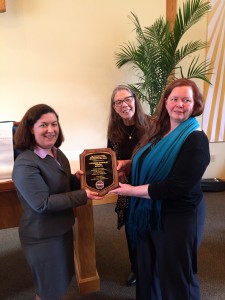