Home  ≫ Expansion of the DNA Databank: The Fingerprint of the 21st Century

Expansion of the DNA Databank: The Fingerprint of the 21st Century

Coined to be the fingerprint of the 21st Century, DNA is a powerful crime-fighting tool that helps convict the guilty, exonerate the innocent and bring justice to victims. In June of this year, the New York State Legislature, at the urging of Governor Pataki, took a tremendous step forward in bringing New York’s criminal justice policies into the 21st century. Now, 46 percent of Penal Law convictions in New York State are required to submit a DNA sample for inclusion in the State’s Databank, including all felonies, and 30 percent of misdemeanors. Through this dramatic expansion, law enforcement officials will have a greater opportunity to solve and prevent crime.

The Databank was created to maintain DNA profiles of convicted offenders so that law enforcement officials can identify the perpetrators of crimes when DNA evidence is retrieved from a crime scene. The Databank began limited operations in 1996, when individuals convicted of homicide and certain sex-related crimes were required to submit a DNA sample. The Databank was expanded in 1999 and again in 2004, but still only required samples from 14 percent of convictions in the State until the most recent expansion was approved in June 2006. 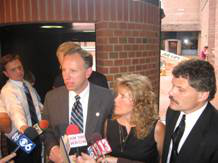 DA Murphy discussing the conviction of Attempted Kidnapper John Regan whose DNA was linked to a rape and sexual assault of two women through the DNA database.

Collecting DNA from the broadest range of criminals will not only solve crimes, but will help prevent crimes as well. Recent studies by the New York State Division of Criminal Justice Services show that, on average, offenders linked to crimes using the DNA Databank had approximately 11 prior arrests and 5 prior convictions. In addition, criminals don’t specialize in the types of crimes they commit; 83 percent of offenders linked to sexual assault cases were in the State’s DNA Databank for a crime other than a sex-related offense. Requiring lower-level convicted offenders to submit a DNA sample assures that criminals’ DNA profiles are in the Databank at the outset of their criminal careers, so that those who choose to re-offend will be identified more readily and with greater certainty –limiting future criminal activity. As of June 1, 2006 2,499 offenders have been linked to evidence from 3,916 crimes across New York State. Now, with more than 60,000 samples projected to be added to the Databank within the next year, we will be able to connect the dots on many more crimes.

As of June 1, 2006, there were 17,748 forensic crime scene samples in the New York State Databank. In human terms, this translates into thousands of crime victims—mostly survivors of rape—waiting each day for their attackers to be convicted of a DNA designated offense so that law enforcement will have the evidence needed to put their attacker behind bars. This most recent expansion of the Databank will bring us one step closer to solving these crimes.

“The bottom line is that requiring more convicted criminals to submit a DNA sample will allow our law enforcement professionals to solve more tough cases and catch criminals before they murder and rape again. Every time New York’s databank is expanded, more heinous crimes are solved and prevented.” –Governor George E. Pataki Each and every day DNA is solving heinous crimes across New York State. Because of the 2004 expansion, the DNA Databank linked Raymon McGill to the rape of an elderly woman in 2000 as well as to two brutal homicides in the Capital region. McGill, a career criminal, was identified in 2005 following his conviction and sentencing for a DNA qualifying offense, although he had been convicted of other low-level non-DNA qualifying crimes over the years prior to his conviction. If the Governor’s legislation had been in effect prior to 2001 and allowed the collection of DNA from offenders convicted of misdemeanor offenses, McGill would have been identified at the time of the 2000 rape and at least one homicide likely would have been prevented.

The new law, which went into effect on June 23, 2006, amends section 995(7) of the Executive Law to require anyone convicted of and sentenced for any penal law felony or an attempt to commit a penal law felony, where such attempt is itself a felony offense, as well as to 18 new specified misdemeanor offenses (including petit larceny), to provide a DNA sample for the State DNA Databank. The legislation applies to offenders convicted and sentenced for one of the newly designated offenses committed on or after June 23, and also to offenders who committed their offense prior to June 23, but who did not complete their sentence imposed thereon before June 23.