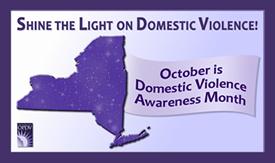 To the Editor:
This October, Saratoga County will join other communities across New York and the country in observance of Domestic Violence Awareness Month. Domestic Violence is the willful intimidation, physical assault, and/or other abusive behavior perpetrated by a family member or an intimate partner against another member of the family. It is an epidemic affecting individuals in every community, regardless of age, economic status, race, religion, nationality or educational background. Violence against women is often accompanied by emotionally abusive and controlling behavior, and thus is part of a systematic pattern of dominance and control. Domestic violence results in physical injury, psychological trauma, and episodically, death. The consequences of domestic violence can cross generations and truly last a lifetime.

One in every four women will experience domestic violence in her lifetime; a staggering 1.3 million every year. Women between the ages of 20 and 24 are at the greatest risk of nonfatal intimate partner violence. However, women are not alone, 15% of all domestic violence victims are men. Additionally, children who witness violence between one’s parents or caretakers is the strongest risk factor of transmitting violent behavior from one generation to the next. Along with the victims of domestic violence, the community suffers as well. Costs associated with domestic violence exceeded $5.8 billion last year.

The Saratoga County District Attorney’s Office continues to work closely with local groups such as the Domestic Violence and Rape Crisis Services of Saratoga County, and the Mechanicville Domestic Violence Advocacy Program. Both organizations offer services for children, counseling and support. Additionally, my office has crime victim specialists who provide valuable information and assistance to victims of domestic crime as their batterers are prosecuted. Also, we have two assistant district attorneys assigned specifically to prosecute domestic violence cases in county court, and in the three local courts specifically designated as domestic violence courts, namely, Saratoga Springs, Mechanicville and Clifton Park.

New York State has been diligent in its fight against domestic violence. New York is currently the only state to have an executive-level agency, New York State Office for the Prevention of Domestic Violence (OPDV), dedicated solely to the issue of domestic violence. OPDV recently redesigned the training modules for law enforcement to better equip them with the tools and resources necessary in combating this epidemic. The revitalized training includes a mandatory arrest policy, so that the batterer is removed.

While previous campaigns to “Shine the Light on Domestic Violence” have made considerable gains in the prevention of domestic violence, our work is never done. Only a continued coordinated community effort that balances the safety of victims and holds offenders accountable can one day end domestic violence.

Join with me and spread the message that domestic violence will not be tolerated by joining the fight this October to make every home a safe home.

For more information please visit our web site at www.jimmurphyda.com