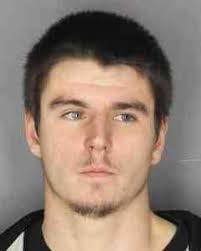 Craig D. Dufore, (dob 10-13-93) was sentenced today in the Saratoga County Court before Hon. James A. Murphy, III to an indeterminate term of incarceration in State Prison, the minimum of which shall be one and one third years and the maximum of which shall be four years, for leaving the scene of an incident without reporting it which resulted in death, in violation of New York State Vehicle and Traffic Law Section 600 (2)(a), a Class “D” felony, for an incident that occurred on October 30, 2016.  Dufore had previously pled guilty on May 16, 2017 when he admitted that he was operating a motor vehicle on October 30, 2016 on Saratoga Avenue, in the Town of Milton, when he left the scene of a crash involving the vehicle he was operating and 32-year-old Jacob C. Perring who was a pedestrian on the roadway.  Defendant Dufore fled the scene and did not come forward to report the incident. After a swift and thorough investigation by the Saratoga County Sheriff’s Department’s Collision Reconstruction Unit and Investigations Unit, the vehicle involved was located and ultimately it was determined that Dufore was the driver of the vehicle at the time of the incident.  The victim was taken to Saratoga Hospital and ultimately succumbed to the injuries he sustained in the collision.

During the sentencing proceeding today in the Saratoga County Court, a powerful victim impact statement written by Jacob Perring’s mother was read expressing how the impact the defendant’s actions on October 30, 2016 have forever changed her life and that of her entire family.  District Attorney Karen A. Heggen was pleased with the sentence and noted that “this sentence represents defendant Dufore appropriately being held accountable for his callous criminal act of leaving the scene of a fatal crash.”  DA Heggen also commended “the good work of the Saratoga County Sheriff’s Office for swiftly putting the pieces back together so that Craig Dufore could be brought to justice.”

The case was investigated by the Saratoga County Sheriff’s Office and prosecuted by Assistant District Attorney Patrick J. Campion.  Defendant Dufore was also sentenced to mandatory court fees as well as a mandatory license revocation.