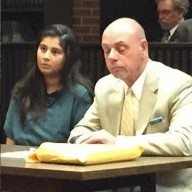 Saratoga County District Attorney Karen A. Heggen announced that Malina M. Singh (DOB 08/03/1994), of 21 Kristin Jones Road, Lake Luzerne NY 12846, was sentenced Monday morning in Saratoga County Court before the Hon. Matthew J. Sypniewski, Acting Saratoga County Court Judge. Malina Singh was sentenced for her conviction of Vehicular Manslaughter in the Second Degree, (in violation of section 125.12(1) of the Penal Law, as a class “D” Felony,) to an indeterminate state prison term of 2 to 6 years. As part of the sentence, Singh will be required to install an ignition interlock device in any vehicle she owns or ever operates upon her release for 3 additional years.

Malina Singh’s conviction stems from her previously entered guilty plea on June 22, 2015, where she admitted that in the early morning hours of September 5, 2014 she operated a motor vehicle in an intoxicated condition and then struck and ultimately caused the death of Jonathon L. Rogers, a 34 year old pedestrian, as he walked along State Route 9N in Corinth. Singh had spent the hours leading up to the fatal crash drinking alcohol and a chemical test of her blood revealed a blood alcohol content (BAC) of 0.18% – an amount more than twice the legal limit.

At sentencing, the victim’s (Jonathon Rogers) mother Susan Miller delivered an emotional statement and detailed how their family will never be the same as they have lost a son, a brother and a friend – and that his (Roger’s) children have lost their father. Ms. Miller continued that, as a parent, words could not express the devastation she feels – Rogers was her “baby boy” and the “light of her life,” but that light has now been extinguished because of Singh’s decision to drink and drive on September 5, 2014.

Likewise, Tracy Witkowski delivered a statement on behalf of the victim’s (Jonathon Rogers) two children, and identified all of the special moments in her children’s lives that Jonathon will now never get to experience, and how her children will now have go through their lives and through those moments without their father present to share in them.

DA Heggen said “There is simply no amount of time that can compensate for a life taken due to the Defendant’s senseless and criminal decision to drive drunk on September 5, 2014. This case typifies the tragic consequences that can result from drunk driving – the loss not only of an innocent life, but the equally devastating collateral consequences to the family and friends left behind. We believe this to be a fair sentence, and hope that this morning’s plea has been able to bring some element of closure and justice to the family of Mr. Rogers.”

DA Heggen recognized the efforts of Assistant District Attorney Matthew R. Coseo, who prosecuted the case, as well as the Saratoga County Sheriff’s Department for their efforts in bringing this case to a successful conclusion.