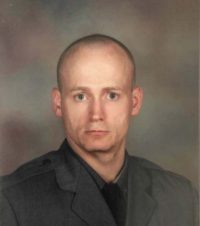 Saratoga County District Attorney Karen A. Heggen announces that Aaron M. Munise, DOB 8/4/1986 of Johnstown, New York, was sentenced on July 9, 2021 by Acting Montgomery County Court Judge Traci DiMezza to a term of one (1) to three (3) years incarceration in the state prison system. Munise was found guilty on April 23, 2021 by a Montgomery County jury of the crime of Criminally Negligent Homicide for causing the death of New York State Police Member Jeremy VanNostrand.

On November 27, 2018, Trooper Jeremy VanNostrand was on his way to work at the State Police Barracks on Rt 5 S in the Town of Glen in his personal vehicle.  Munise was operating a Ryder Freightliner box truck directly behind VanNostrand.  As VanNostrand slowed to pull into the barracks, Munise failed to stop, and without applying the brakes at all, crashed into the back of VanNostrand’s Nissan Altima forcing the Altima into the path of an on-coming pick up truck.  VanNostrand’s vehicle was struck head-on.  He was attended to immediately by members of the New York State Police who responded to the crash from the barracks, and was transported to Albany Medical Center, where he passed away from the severe injuries sustained in the crash.