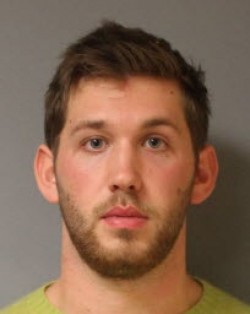 Jeffrey Mann, Jr. dob 7/14/89 of Lake George, NY was sentenced today to a term of incarceration in State Prison on his convictions of Criminally Negligent Homicide and Assault in the Second Degree (a violent felony) in Saratoga County Court before Acting Saratoga County Court Judge Matthew J. Sypniewski. Mann will serve 1 1/3-4 years on his conviction to Criminally Negligent Homicide, and 2 years on his conviction to Assault 2nd – both terms of incarceration will be run concurrently, and Mann will serve an additional 3 years of post-release supervision following his release from State Prison.

Jeffrey Mann had previously pled guilty to those charges on May 20, 2015 which stemmed from a fatal assault instigated by Mann on Aaron Huggins at The Paddock Bar in downtown Saratoga Springs on September 19, 2014. In pleading guilty to the charges, Mann admitted that he recklessly and negligently slammed the victim (Aaron Huggins) onto the cement floor of the bar. The assault resulted in the victim suffering a traumatic brain injury when his head struck a cement floor after being thrown to the ground by Mann. Aaron Huggins eventually succumbed to his injuries surrounded by his family and friends at Saratoga Hospital on September 24, 2014.

At sentencing today, Reggie Huggins (the father of the victim-Aaron Huggins) delivered an emotional statement on behalf of the family, detailing the profound impact that the loss of their son has had upon his family. Addressing a large audience in the courtroom that included many members of the Huggins’ family and friends, he detailed all of the things his son was in life and how family and friends were the most important things to Aaron – especially Aaron’s infant son Aidan. Likewise, Alisa Huggins (the widow of the victim-Aaron Huggins) delivered a statement detailing how their child (Aidan Huggins) would now grow up without his father, Aaron, there present to teach him all that a father should.

District Attorney Karen A. Heggen remarked that with today’s sentencing that she was satisfied that the defendant accepted responsibility for his actions and was sentenced appropriately for them. DA Heggen likewise hoped that today’s proceeding might finally be able to bring the Huggins family some closure to this tragedy. In commenting on the underlying offense, DA Heggen stated that she hoped that this case would serve as a reminder – as the summer season truly gets underway – that bad decisions made while fueled with alcohol can have tragic and long-reaching consequences.