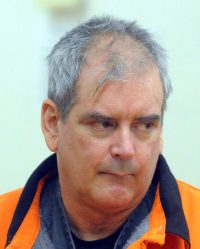 Saratoga County District Attorney Karen A. Heggen announced today that Michael C. Norton, (d.o.b. 11/4/58), of 7 Third Avenue, Hadley, New York, was sentenced today by Saratoga County Court Judge James A. Murphy, III,  to 20 years to life in state prison for having murdered his wife, Sherry Norton, at their home on May 2, 2017.  This sentence follows Norton’s guilty plea on October 12, 2017 to Murder in the Second Degree, in violation of New York State Penal Law Section 125.25(1), a “Class A-I” felony.

At Norton’s sentencing today, several spoke and painted a picture of the horrific, gruesome crime scene.  Assistant District Attorney Jennifer L. Buckley addressed the Court and described the thorough, professional work of the Saratoga County Sheriff’s Office and the New York State Police Forensic Identification Unit who processed the crime scene. Buckley noted that the victim, Sherry Norton’s “…life came to an abrupt, brutal, violent end” at the hands of her husband Michael Norton.  Buckley described the horrifying scene found by the police on their arrival, including the significant blood splatter cast-off from the ax the defendant used to strike repeated blows to his wife’s head and back.  Buckley noted the life-ending injuries to the victim’s spine and skull that resulted from this attack and the devastating effect this crime continues to have on the couple’s 20-year-old daughter.

Judge Murphy then addressed Michael Norton, noting the ultimate irony of the defendant claiming to have loved his wife and yet the defendant showed that love by killing her in such a brutal manner.  Judge Murphy said this was a “…classic case of domestic violence” where the defendant offered excuses and looked to blame the victim and not take responsibility himself for his actions.

District Attorney Heggen attended the sentence and observed “…the defendant tried each and every way to blame everyone but himself for killing his wife.  Judge Murphy’s comments that this is a “classic case of domestic violence” is very accurate.  The defendant continued to try to manipulate and control the situation, without ultimately accepting responsibility for his conduct.  We work every day in our office to support the victims of domestic violence and to seek justice for all involved.   Sadly today, the actions of the defendant brought about life-long devastating consequences for his whole family.”

The defendant was also sentenced today to 2 1/3 to 7 years for his conviction of Reckless Endangerment in the First Degree, a “Class D” felony, in violation of New York State Penal Law Section 120.25.  The defendant had entered a plea to that charge on April 5, 2017 and admitted to having discharged a shotgun in his home with reckless disregard for his wife and daughter who were in close proximity to where the gun was pointed and fired.  That sentence was enhanced from the original proposed sentence after Judge Murphy determined that Norton had violated the conditions of that plea in April- specifically that the defendant remain arrest free.  Judge Murphy ordered that the sentence for the Reckless Endangerment was to run concurrent with the 20 years to life sentence Norton received for the Murder in the Second Degree conviction.