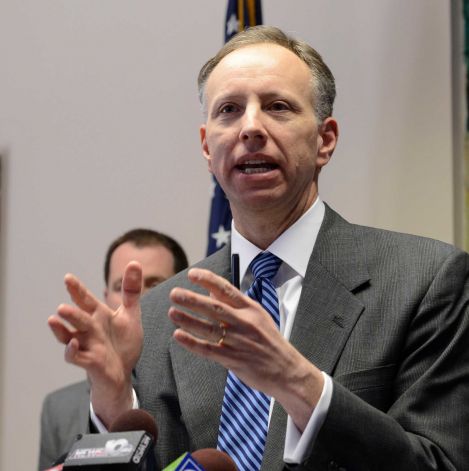 Saratoga County District Attorney Jim Murphy resigns as DA so ADAs’ jobs are protected and victims’ cases are not jeopardized by political appointment & turnover in the office.

Saratoga County District Attorney James A. Murphy, III, 52, announced at a press conference his resignation as District Attorney effective at 5:00 pm today. He made the announcement surrounded by his assistant district attorneys, investigators, crime victim specialists and support staff. He hand delivered his resignation to the Governor’s Office and the Office of the Secretary of State and the Saratoga County Clerk and NYS and County Boards of Elections.

If Murphy remained in office past Saturday, then the Governor would have had the right to name his successor and the election would have been in November, 2015. There are nearly 30 appointed or “at will” employees in the office all serving at the pleasure of the DA whose jobs hung in the balance as they could have been replaced by the appointee and then again by the elected DA in 2015.

Instead, Murphy chose to resign as DA, allowing the voters to choose who will be the next DA this November, 2014 without a Governor’s appointment, avoiding a potential turnover by the political appointee and then again by the elected DA the following year.

“The more I thought about it the easier the decision became. I’m a public servant and my job is to put the public’s welfare and interest above all else. Whatever personal obstacles I face, they pale in comparison to the importance of ensuring that every single victim’s case is prosecuted without delay or interruption. To think that the work of a police officer, an assistant DA or a brave victim coming forward would be jeopardized by turnover in the DA’s office due to a political appointment is simply unacceptable and contrary to everything my administration stands for.”

Murphy was one of the first prosecutor’s offices in the state to establish victim specialists within the office who work side by side with prosecutors rather than outside the office.

“Victims’ rights are one of the most important things of my tenure as DA. I’m not going to tell a victim that I would have allowed turnover in the office twice, first by political appointment and then by an election in 2015 as the reason why her rape case was dismissed, or the reason why it fell through the cracks.”

Murphy forfeits the remainder of his salary, benefits and health coverage immediately, but the nearly 30 “at will” employees of the DA’s Office would retain their positions and the cases would continue without turnover in prosecutors assigned.

By resigning today, Murphy ensures a smooth transition in the DA’s office until the voters elect the next district attorney in November 2014.

“The ADAs are the most experienced, knowledgeable and trial ready group of lawyers who know the police and the witnesses in their cases. Continuity of assigned ADA is paramount in ensuring a successful resolution in a criminal case. My last official act as DA, of resigning, ensures that victim’s rights are protected, ADAs jobs are secured and most importantly, our community will remain safe for years to come. That is how I see my role as a public servant and especially as District Attorney. ”

Murphy praised his attorneys as they’ve successfully prosecuted violent felonies, white collar crime, DWI Manslaughter and Assault cases, murders, kidnappings, rape and sex abuse, child abuse, domestic violence, drug cases and hundreds of thousands of traffic cases, crashes and have an active drug treatment court all while focusing on victims’ rights and preventative programs. These attorneys work not only in Ballston Spa, but also in the 44 justice courts in the towns throughout the county, often till late into the night.

He went on to say

“I hope the people of Saratoga County understand how much this hard working team imparted the quality of life as we all enjoy. Personally, I am so grateful to have had the privilege of working with these professionals.”

In addition, since Murphy will no longer be with the office from now until he takes the bench in January of 2015, as he is unopposed for the Saratoga County Court seat being vacated by Judge Jerry J. Scarano, he will have less time away from Saratoga County as a judge due to a conflict of interest in that he will not be in the office during the time when cases are being brought to the Saratoga DA’s Office for prosecution.