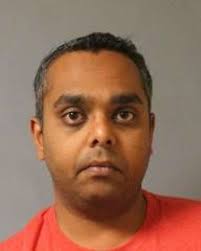 On July 29th  and August 11th, 2017, Ramiz T. Hajratalli burglarized two homes located on Caroline Street and Jumel Place, respectively.  At trial, prosecutors proved that the burglaries were not the conventional type of burglaries where the defendant broke into a residence to steal property, but were instead burglaries that consisted of the defendant breaking into or unlawfully entering the bedrooms of homes in an effort to have nonconsensual physical or sexual contact with the women inside as they slept.  The defendant was a stranger to these victims who were fortunately not physically injured.  Both home intrusions were disrupted when the defendant was detected.

The defendant fled from the July 29th Burglary after the Caroline Street victim screamed, but left a fingerprint behind on her bedroom door knob.  The defendant was then caught on August 11, 2017, just after midnight when the Jumel Place resident, a former City of Hudson PD Detective, awoke to see a stranger just beyond the foot of his bed watching him and his girlfriend while they were lying in bed.  The homeowner chased the intruder out of his house and down the street where he was able to apprehend him until Saratoga Springs Police Officers arrived.

At sentencing, all three victims of the incidents provided chilling victim impact statements in Saratoga County Court.  The Caroline Street victim spoke about how her day-to-day actions and activities have changed since Hajratalli broke into her locked apartment and bedroom.  She told the court about how she now approaches what she does differently and noted, “I regularly wake up when I can’t sleep to place a table in front of my locked bedroom door to ensure that I can, at the minimum, hear when someone breaks in- because it’s now a possibility in my mind.”   The residents of the second Burglary also provided insight into how this crime has forever affected their lives.  The female Jumel Place victim said the August Burglary has “dramatically changed my life and my family’s lives for the worse… [and] has become my worst nightmare.”  She detailed the sleep deprivation, fear and anxiety she regularly experiences, and concluded that “there is no [sentence] in the world that can be given that can reverse the pain, heartache and permanent emotional scars that Ramiz Hajratalli’s actions have caused me and my family and how it has negatively impacted our daily lives.”  The second Jumel Place victim, who retired with more than 20 years in law enforcement, provided a unique perspective.  He said, “I thought I understood what victims of a crime went through.  I was wrong, real wrong.”  He spoke about how this crime impacted his girlfriend, and her 23-year-old daughter.  “We all felt extremely vulnerable because the sanctity of our home had been violated…  Thank God no one was hurt… I thank God I was home that night.”

Lead prosecutor, First Assistant District Attorney Alan M. Poremba, in asking Judge Murphy to impose the maximum sentence allowed by law, highlighted the defendant’s nefarious and sinister actions in these two incidents.  Poremba noted that “if your home is your castle, then your bedroom should be the safest refuge you know.”  Defendant Hajratalli violated that safe space in both instances. This predator took precautionary measures to avoid getting caught, as his conduct escalated.  Judge Murphy then imposed a 15 year maximum sentence for each of the two burglary convictions that would run consecutively for a total of 30 years.

Today, the Appellate Division affirmed the convictions, but modified the sentence.  The higher Court ruled that “[a]lthough maximum sentences were statutorily authorized, the defendant ha[d] no prior criminal history and his conduct, while serious, did not result in any physical touching or harm.”  The Justices then modified the two burglary convictions to run concurrently “in the interest of justice” for a total of 15 years.

Justice John C. Egan, Jr., who concurred with the overall opinion but dissented on the sentence modification stated that it was “within the statutory parameters of the law” and noted that the “defendant was convicted of breaking into two separate residences during the nighttime hours while their occupants slept inside.”

District Attorney Heggen once again praised the efforts of all involved in this case.  “From the valiant efforts of the Caroline Street resident who chased and captured the defendant as he fled from his home, to the methodical work of the Saratoga Springs Police Department to piece together the evidence from each burglary, and to tie each crime to the defendant, to the clear and complete presentation of First Assistant Alan M. Poremba and ADA Michele Schettino, the trial jury found beyond a reasonable doubt Defendant Hajratalli had committed each of these crimes.”

District Attorney Heggen has not decided whether she will appeal or reargue the sentence modification.